Has being in a certain town ever just made you feel at ease? You’re in awe with its beauty and the pulse of the people. Even if you’re hundreds of miles away from home, it makes you feel like you’re just around the corner from your block. That’s how I felt during my trip to Stratford-upon-Avon. The town reminded me of places I’ve been to before near my home. It’s one town in England that I could imagine myself living in if I ever (probably won’t, but if ever) I moved to the U.K. It was a quieter town than London and Oxford, but it still had a lot of energy to it. There were a number of shops, restaurants, and bakeries. It also had a river running through it which made for a peaceful rest in the park at one point during our day trip. It seemed like a very tranquil town, overall.
Here are some of the highlights of my trip to Stratford:

I came to Stratford that day with one intention: to buy a baked good. While the dining hall on my campus served plenty of delicious desserts throughout the day, I wanted to taste the local culture. I spent the first 45 minutes in Stratford trying to find a dessert. I didn’t know what exactly I wanted, so I walked in and out of bakeries aimlessly until something stood out to me.
Finally, I came across a pastry shop, Hobson’s Patisseries, that had a number of scrumptious cakes in the window. When I went inside I was surprised to find that their bakery case was filled with tons and tons of cake. They must have had at least 30 different kinds. I was completely in heaven. My eyes laid on the carrot cake (for some reason I’ve been in a carrot cake kind of mood lately). Just as I was about to order it, I noticed the red velvet cake. I couldn’t decide between the two, but the cashiers told me that they preferred the carrot cake – so that’s what I went with. I have absolutely no regrets – other than the fact I didn’t get a picture of it. This carrot cake had to be one of the best that I’ve ever had. The cake itself was very moist with a small number of raisins and a few walnuts in it (how I prefer it to be). The cream cheese frosting was on on the sweeter side. I like cream cheese frosting that tastes less cheesy and more sugary, so this was perfect for me. There were also hints of cinnamon in the cake and shavings of orange on the frosting. This was a nice unexpected accent to the cake. SO WORTH IT!

We strolled around Stratford for a little while, enjoying one of the few sunshine days. We stopped to take pictures by the water and enjoyed the scenery. We went into a few shops, two of which were Poundland and Boots. They reminded me of American chains, but there were some cultural differences that I found interesting. Poundland can most be compared to a dollar store, but the price of an item varies from a couple pence to a few pounds. It’s more like 5 Below in regards to the prices, but it has a large variety of cheaper products like a Dollar Tree would. One thing I found very interesting at this store was the HUGE selection of Cadbury and Nestle products. Most of them really were only one pound. They also had name-brand full-sized shampoos and other toiletries, also mostly priced at one pound.
Boots is more like a CVS or another drugstore. They also have a wide range of products but at competing prices. The brands were mostly the same as in the US, but some of the packagings were different. One cultural difference between Europe and the US is the concept of plastic shopping bags. In England (and I later learned in France too), it’s not customary to give a shopper a bag for their items as they check out. If the shopper does want a bag, they have to pay a few pence to get the bag. Of course, bags weren’t that expensive. It was just an adjustment. I had to either bring my own bag or pay to get one. Other than that, shopping was mostly the same in England.

During my first week in England, my school’s dining hall made kind of plain, more traditional English food. By the time we went to Stratford-upon-Avon, Adam, my friend, and I were CRAVING some good old Italian food. We found a place in Stratford called Zizzi that had a few vegan options. They have a number of locations across the U.K. so I would describe it as more of a chain restaurant. The food tasted really good here. I got a vegan spaghetti bolognese made with lentils. I wish there was a little bit more of the bolognese on my dish, but it was still really good. It definitely satisfied my pasta cravings. Adam got a pizza with vegan cheese and mushrooms. I really enjoyed his pizza. It was made in a pizza oven which gave it a little bit of a crunch to the crust. While vegan cheese isn’t always a popular choice, I really liked it on this pizza. My friend got a spicy chicken pasta that looked pretty good. The portions sizes were just enough at this restaurant so that we didn’t have to take anything back. I would definitely recommend Zizzi if you’re having an Italian craving while in England. 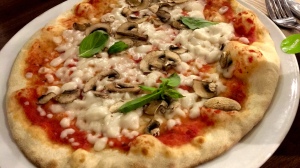 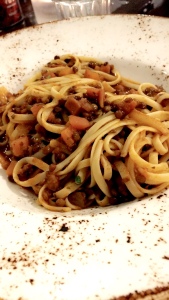 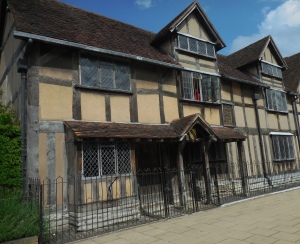 Stratford-upon-Avon was a cute little town with quite a few shops and plenty of history. I loved being able to see Shakespeare’s birthplace and being able to see one of his plays performed by such a well-known theatre company. From the carrot cake and the pasta to the scenery and the Shakespeare history, Stratford-upon-Avon was definitely my favorite town in England.
Adieu, my Dolls!
Thinking about going to another country or studying abroad? Read “Real Talk: Seizing Opportunities.”
To get a more in-depth look at the world of The Porcelain Doll, be sure to follow me on Instagram, Twitter, and Pinterest. Also, check out my Facebook page, YouTube channel, and poetry blog.

8 thoughts on “My Travel Diaries: Stratford-upon-Avon”

Fun fact: I'm not sure if my eye color is really blue or green.... Hello, my dolls. I'm Jen and welcome to my lifestyle blog! I am absolutely obsessed with taking pictures of my food, talking about music and trying out new looks. So, I decided it was time to write about it. Here we go...